Pyramid Dam and Lake are located about 60 miles northwest of downtown Los Angeles and provides water storage for the greater Los Angeles area. The dam was built between 1969 and 1973 as part of the California Department of Water Resources (DWR) State Water Project (SWP).

DWR is modernizing its SWP portfolio across the state. This includes identifying and proactively addressing any issues that could impact the delivery of water or the safety of surrounding communities. Over the next several years, DWR will conduct assessments of Pyramid Dam and undertake construction activities to ensure the dam continues to function safely.

In its most recent inspection, the California Division of Safety of Dams (DSOD) rated Pyramid Dam as satisfactory – meaning there are no existing or potential dam safety deficiencies that will impact the functioning of the dam. However, there are improvements that could be made to mitigate impacts due to an extreme weather event or earthquake. Based on the most recent DSOD findings as well as other inspection and assessment activities conducted by DWR, the initial focus of the Pyramid Dam modernization will be to assess the impacts of an extreme weather event and to conduct earthquake analyses to identify improvements for the gated spillway and the emergency spillway.

What to Expect Next

During the modernization process, DWR will be operating construction equipment which will result in some localized noise and increased activity may be expected. There are no impacts to recreation at Pyramid Lake. DWR anticipates that the modernization of the dam will take about 10 years to complete.

DWR, the owner and operator of Pyramid Dam in Los Angeles County, developed a public information toolkit to provide resources on dam safety and the Pyramid Dam Modernization Program.

The toolkit’s components include: 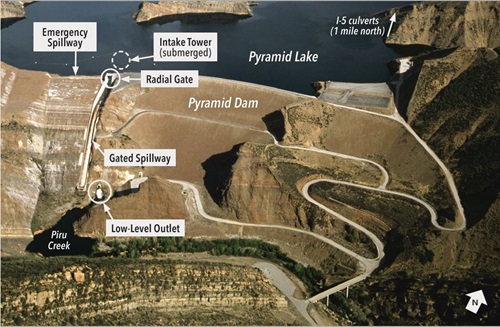 Pyramid Lake and Los Alamos Campground in Los Angeles County reopen Sept. 23 to the public following a temporary closure per a United States Forest Service order to ensure public safety due to widespread wildfires in California. Due to the presence of harmful blue-green algae at Pyramid Lake, the Department of Water Resources urges everyone to avoi ...

DWR is urging the public to avoid contact with water at Pyramid Lake in Los Angeles County until further notice due to blue-green algae (cyanobacteria).

Today, the Department of Water Resources (DWR) announced that campgrounds at Pyramid Lake in Los Angeles County, Silverwood Lake in San Bernardino County and Lake Perris in Riverside County have reopened. In order to follow Department of Public Health guidelines, the campgrounds will be available at half capacity to allow for physical distancing.

As part of an effort to modernize Pyramid Dam located in Los Angeles County, the Department of Water Resources (DWR) recently completed assessments for the dam’s gated and emergency spillways.

DWR is reopening recreational opportunities at Pyramid Lake in Los Angeles County on Saturday, May 23, 2020. Visitors are advised to follow CA Department of Public Health Guidelines, as well as Los Angeles County guidelines, to ensure the health and safety of employees and visitors.

Following the guidance of the United States Forest Service, the California Department of Water Resources has temporarily closed Pyramid Lake in Los Angeles County to slow the spread of COVID-19.