Starting in May 2017, DWR and its construction contractors began repairing and rebuilding Oroville’s main and emergency spillways. To ensure public safety, the main spillway was successfully repaired by November 1, 2017 in order to function as a flood control outlet if needed that winter.

More than 1,000 people worked more than 2 million hours to rebuild the Oroville spillways to ensure the safety of downstream communities. 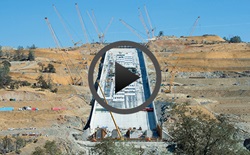 Click the image above to view all of DWR's Oroville spillways construction videos on our YouTube playlist.