Subsidence and the California Aqueduct

Subsidence, or the sinking of land, has been documented throughout California for almost a century. Prior to the construction of the aqueduct in the mid-1960s, portions of land near the aqueduct dropped between 20 and 30 feet. While rates of subsidence stabilized for a few decades after original construction, the aqueduct has sustained an alarming and unprecedented increase in subsidence rates. In the three years of the drought from 2013 through 2016, areas of the aqueduct sunk nearly three feet.

The California Aqueduct delivers water to 27 million people throughout the state, supplying water for agriculture as well as municipal uses. The Aqueduct was built by California’s Department of Water Resources (DWR) and the U.S. Bureau of Reclamation.  After construction, the operation and maintenance of the facilities were managed by DWR.

The Aqueduct is broken up into pools, which are roughly 10 miles long in the central valley.  At the end of each pool, a gated check structure controls the flow from one pool to the next, as well as the water surface elevation with the pool.  The numbering of a check structure is associated with its upstream pool.  Each pool, being roughly 10 miles long, has an elevation fall of 2 to 4 feet, which is used to move the water.  Changes to this profile, through subsidence, has caused decreases in the flow capacity of the system, as well as operational difficulties. 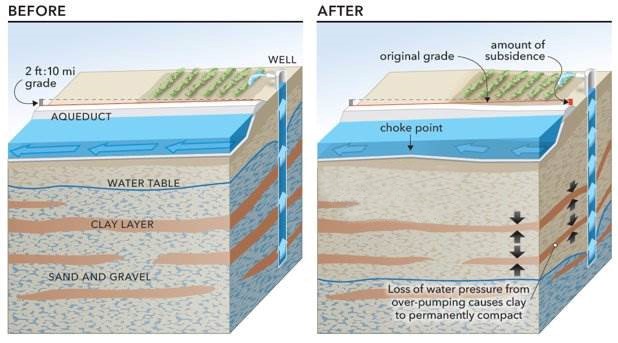 Deep groundwater pumping has long been understood as the primary cause of this alarming trend, and typically ramps up during extended drought periods. The effects of climate change are predicted to exacerbate this trend. In addition, the recent conversion of row crops (often fallowed in dry years) to orchards and vineyards (cannot be fallowed in dry years) has resulted in more subsidence when surface water is unavailable during dry periods.

Increased water delivery costs: Subsidence has reduced the flow capacity of the aqueduct in areas. To maintain water deliveries, operators must move water more often during on-peak hours, which increases operating costs and limits the use of renewable energy sources. Since the SWP is the largest user of electricity in California, this impacts all Californians.

Decreased reliability: As the aqueduct sinks, there is increased risk that water will go over the aqueduct liner, which could result in erosion or damage to other delivery structures, delivery losses, flooding, and require emergency outages of the aqueduct.

Increased operations and maintenance: To address subsidence, DWR must continue raising the aqueduct lining and embankments, as well as repairing and/or modifying appurtenant structures.

To receive a copy of the original report, or if you need additional information, refer to the listed contact information on this page.