History Of Water Development And The State Water Project

Before gold was discovered at Sutter's Mill in 1848, California was "virgin" land. As described by S.T. Harding in his 1960 "Water in California," there were no substantial settlements, only missions and ranches along the coast and a few early pioneers like John Sutter. The streams ran uncontrolled, and during the wet seasons, large areas became wetlands filled with thousands of waterfowl and other wildlife.

The discovery of gold lured thousands of immigrants, dubbed the Forty-niners, from all over the world, who would soon change the new state's pristine nature, including the way its water resources would be viewed and used. Miners built hundreds of miles of flumes and ditches to divert water so it could be used to sluice out the gold. In the following years as the precious metal became more difficult to find, frustrated miners turned to farming, using California's brimming aquifers to irrigate their crops. Local water systems were built in the early part of the 20th century to bring water to cities that were developing into booming metropolitan centers like San Francisco and Los Angeles.

The first investigation of California's water resources began in 1873 when President Ulysses S. Grant commissioned an investigation by Colonel B. S. Alexander of the U.S. Army Corps of Engineers. Alexander's report, completed the following year, surveyed the Central Valley's irrigation needs and recommended systematic development of the Sierra watersheds.

The state followed with its own study in 1878 when the State Engineer's office was created and filled by William Hammond Hall. His comprehensive study, conducted most intensely between 1878-83, produced an impressive body of work that included drainage and river channel investigations with recommendations for flood control and navigation improvements on the Sacramento, Feather, Yuba, and Bear rivers and in the Sacramento-San Joaquin Delta.

Irrigation surveys contained maps; climatic, geographic, geologic, and hydrologic data; soil profiles; well inventories; and summaries of irrigation practices. Also under Hall's direction, a permanent system of more than 200 stream gauges was installed. Overall, his report concurred with the Alexander report that the waters of the Central Valley should be developed for the benefit of the state.

A State Water Plan is Proposed

The concept of a statewide water development project was first raised in 1919 by Lt. Robert B. Marshall of the U.S. Geological Survey. He proposed transporting water from the Sacramento River system to the San Joaquin Valley then moving it over the Tehachapi Mountains into Southern California. His proposal led to the first plan for a state-operated water project.

In 1931, State Engineer Edward Hyatt introduced a report identifying the facilities required and the economic means to accomplish the north-to-south water transfer. Called the "State Water Plan" the report took nine years and $1 million to prepare. To implement the plan, the Legislature passed the Central Valley Act of 1933, which authorized the project. A $170 million bond act was subsequently approved by the voters in a special December 19, 1933 election.

But in the midst of the Great Depression, revenue bonds were unmarketable so no funding could be found to begin construction of the Central Valley Project. The federal government took over the CVP as a public works project to provide jobs and its construction began in 1935. Today, the CVP provides water to parts of the Central Valley and Bay Area.

California experienced a second economic "gold rush" after World War II ended in 1945. People flocked to the Golden State, attracted by its climate and lure of new jobs. Businesses and tract housing developments quickly multiplied, especially in larger metropolitan areas such as San Francisco and Los Angeles. The increased population and commerce made it clear to local water officials that their local water supplies alone would not meet their communities' future needs. Groundwater basins were also being rapidly depleted to irrigate the increasing acreage needed to grow food and fiber for a growing population.

In 1945, the California Legislature authorized an investigation of statewide water resources. The work, conducted by the Division of Water Resources (DWR’s predecessor) under the Department of Public Works, led to the publication of three important bulletins: Bulletin 1 (1951), "Water Resources of California," a collection of data on precipitation, unimpaired stream flows, flood flows and frequency, and water quality statewide; Bulletin 2 (1955), "Water Utilization and Requirements of California," estimates of water uses and forecasts of "ultimate" water needs; and Bulletin 3 (1957), "The California Water Plan," plans for full practical development of California’s water resources, both by local projects and a major State project to meet the State's ultimate needs. 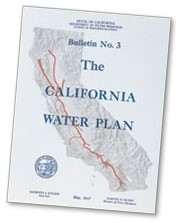 The Division also completed studies that culminated in the Feather River Project presented to the Legislature in 1951 by State Engineer A. D. Edmonston. The initial proposal included a multipurpose dam and reservoir near Oroville complete with a power plant, an afterbay dam and power plant, a Delta Cross Channel (i.e., a peripheral canal), an electric power transmission system, an aqueduct to transport water from the Delta to Santa Clara and Alameda counties, and another aqueduct to carry water from the Delta to the San Joaquin Valley and Southern California.

After additional surveys and investigations, the Division submitted a revised Feather River Project in 1955. The revised project added the San Luis Reservoir and proposed a South Bay Aqueduct serve San Benito County. The North Bay Aqueduct was included in the project in 1957.

The Struggle for Passage

Approval of a state water project did not come easily. Such an immense project had never been constructed. Its costs and engineering feasibility were questioned. Parties in the state's north and south regions vehemently opposed the project. Northerners claimed the water was rightfully theirs and did not want their water flowing south, although the 1931 County of Origin Statute protected their future water needs.

Southern California water agencies such as the Metropolitan Water District of Southern California argued that the project would be futile without guarantees that their counterparts in the north could not rescind supply agreements. MWD was also looking to meet its future needs via its share of water from the Colorado River.

Some in Southern California also questioned whether the designated dollar amount would cover the entire cost of the project. They wanted specific details on every facility, and they wanted to know exactly what they would be paying for.

Delta and San Francisco Bay area residents wanted assurances that their waterways would be protected. (The Bay-Delta would be used as a transfer point, where water would be conveyed to other areas.) That meant sufficient water flows to supply their urban, industrial, and agricultural needs and to maintain good water quality and habitat for fish and wildlife. With many of the Delta islands many feet below the water level, they also wanted their levees rehabilitated to protect them from flooding.

San Joaquin Valley farmers were among the strongest supporters of the project. A state project would not impose an irrigation acreage limit similar to federal Central Valley Project restrictions. They looked to surface water resources to relieve groundwater overdrafts that were causing them to drill deeper and deeper for water, raising costs and causing severe land subsidence in affected areas. Other voices raised in favor were the teamsters, steelworkers, construction workers, and engineers who would gain from public works projects.

Voices against the SWP included the California Labor Federation, which claimed it would benefit agribusiness and not the farm workers whom they hoped to organize, and the State Grange and others who felt irrigation acreage limitations were vital to preserving small family farms.

Special committees met through 1957, 1958, and 1959, attempting to draft a constitutional amendment that would satisfy everyone. That avenue proved futile. What the legislators devised was a series of laws tied to the main bill, called the Burns-Porter Act, after Senator Hugh Burns of Fresno and Assemblyman Carley Porter of Compton, the two key legislative leaders on water policy.

One of these laws, the Davis-Grunsky Act, assured northern counties that water would be available for future projects and $130 million of the $1.75 billion bond funding was earmarked for those projects. The County of Origin and Watershed of Origin acts were reaffirmed in the Burns-Porter Act and in SWP water supply contracts. Despite the affirmation of their water rights, Northern Californians were concerned that these contracts provided for additional water facilities if needed in the future, opening the possibility of more water going south.

For southern parties, the Burns-Porter Act contained most of the guarantees they sought, including contracts for firm water supplies that future legislatures could not change, sufficient funds to pay for the facilities to deliver water to Southern California, and funds to construct only the facilities specified in the act and no others. The act included additional facilities if needed though those remained vague.

Delta water users were placated by the Delta Protection Act of 1959, which ensured their water uses and promised them good water quality for all purposes.

To reassure all parties that the project was achievable, two independent consulting firms were hired to study the engineering and economic feasibility of the project. Less than a month before the November election, Charles T. Main, Inc. endorsed the engineering and Dillion, Read &Co. did the same with the financing. However, because they believed future inflation would limit the State's ability to complete the project's construction, cost-cutting measures were suggested. DWR engineers began reviewing the plans, scaling back the project, reducing certain facilities, and eliminating others.

The State Water Project is Born

The San Francisco Chronicle was among the Project's strongest opponents and urged its readers to vote down the bond issue.

The Burns-Porter Act, formally known as the California Water Resources Development Bond Act, was placed on the November 1960 ballot. Also known as Proposition One, its chances for passage were unpredictable. Heated and continuous negotiations were still ongoing, with MWD withholding its endorsement until days before the election. The San Francisco Chronicle strongly opposed the proposition. California’s North-South regional rivalry was a strong factor in the election.

On November 8, the Burns-Porter Act was narrowly approved by the slim margin of 173,944 votes from about 5.8 million ballots counted. Only one northern county supported the proposition--Butte County, site of Oroville Dam. But one fact was certain, construction was soon to begin on what is now the nation's largest state-built water and power development and distribution system, which would forever change the face and future of a once virgin land.

Construction on the Oroville site actually began even before the passage of the Burns-Porter Act. A $25 million emergency appropriation was passed in 1957 after a record late 1955-early 1956 flood, which devastated Northern and Central California. Statewide, 64 deaths were recorded, most in Sutter County and Yuba City, and more than $200 million of property damage.

In May 1957 work began on the construction of two tunnels on the Western Pacific Railroad relocation to clear the site for the dam and reservoir. Appropriations continued year to year for the relocations and to begin building the South Bay and California aqueducts in 1959.

After the legislative passage of the Burns-Porter Act and the voters' approval of the bond issue, construction started in earnest, with facilities built from north to south. To reduce costs, some facilities were built in stages with additional units or facilities added as demands required.