The San Joaquin Valley has some of the most productive agricultural lands in the world. However, much of the west side of the Valley is plagued by poor subsurface drainage conditions that impact crop productivity. Effective subsurface drainage management is essential to prevent excessive shallow groundwater conditions and the accumulation of salts in the root zones. Monitoring of shallow groundwater and agricultural drainage water is an integral activity to determining the effectiveness of management practices.

The drainage problem is an outgrowth of imported water, naturally saline soils, and the valley's distinctive geological makeup that prevents effective natural drainage in certain areas. Soils on the western side of the valley come from the marine sediments that make up the Coast Range. These soils, high in salts and trace elements, are similar to those that occur in the ocean. Also, much of valley is underlain by a shallow clay layer that obstructs vertical movement of irrigation water. As salts and minerals from surface soils are leached into the groundwater, the water table rises to within a few feet of the surface soil and into the root zone. Unless this water is removed, crops growing in these soils eventually die.

The Agricultural Drainage Program collects, evaluates, reports information and conducts studies and demonstration projects focusing on drainage problems in the San Joaquin Valley. The resulting data and information  and lead to implementation of management plans. 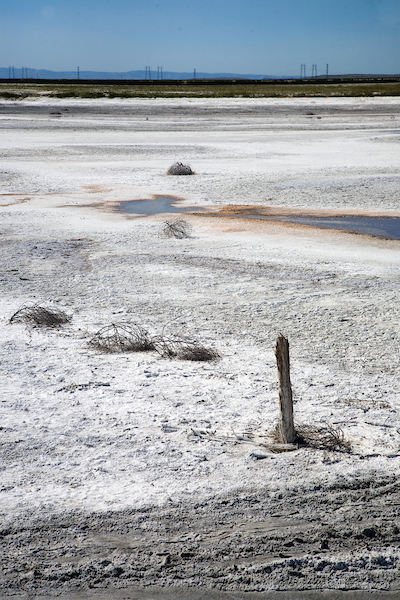 Simply stated, the grower sequentially reuses drainage water to produce crops with varying degrees of salt tolerance. A solar evaporator receives the final volume of drainage water; this water evaporates and salt crystallizes. Plants absorb selenium, which may be volatilized; or accumulate in the plant tissue. Of the remaining selenium some will remain in the soil and some will be contained in the final effluent to become a component of harvested salt. There is no discharge of salts and selenium into rivers or evaporation ponds. Drainage water, salts, and selenium are managed on the farm. An IFDM system can serve as a viable alternative for landowners who may not choose to participate in a voluntary land retirement program for drainage-impacted lands.

Although the cost of planning and implementing an IFDM system may be high, the potential for economic gain and to continue farming may be higher. The benefits from an IFDM strategy include the ability to produce higher value crops and manage salinity and groundwater levels, while complying to regulations.

Agriculture Propositions 84 Water Use and Effici ...