***This is part 3 in a series of articles DWR is publishing about California’s 2021 water year and dry conditions.

California’s hydrologic conditions remain dry as February draws to a close. Although late January storms improved a then-dismal snowpack, statewide snowpack remains at about two-thirds of average for this time of year (or 54 percent of the April 1st average) and natural flow in key Sierra Nevada watersheds is still tracking at amounts seen in the severe drought years of 2014 and 2015 (https://cdec.water.ca.gov/resapp/AccumulatedRunoff).

Storage in the largest northern California reservoirs is also well below average, reflecting cumulative impacts from a dry 2020. Virtually all the state remains in a precipitation deficit, with much of the state having received about half or less of average precipitation to date.

Compared to the very dry and warm water years of 2014 and 2015, this year’s snowpack is larger and statewide average temperatures for the wet season to date, although above average, have not reached the record highs seen in those prior drought years.  Warm temperatures intensify drought impacts, especially for young salmonids that require cold water to survive, and heighten wildfire risks. And, 2021 is a second dry year whereas 2014 and 2015 were the third and fourth years, respectively of California’s five-year drought of 2012-16.  Drought impacts are also intensified by the duration of dry conditions, as soil moisture is depleted and vegetation is stressed. 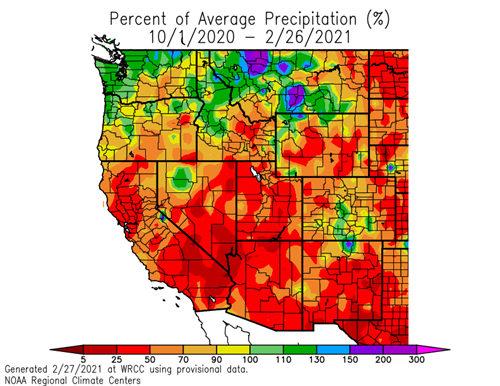 The spring equinox is less than a month away and with spring we see the transition from winter weather patterns to warmer and drier conditions. March is the last of California’s normally wet months.  It remains to be seen if this March can mitigate some of the water year’s deficit.  A Miracle March is the state’s best hope for finishing the water year in better shape, although it is very unlikely that full recovery to normal surface water supply conditions would occur.

The State Water Project allocation is currently at 10 percent for south of Delta contractors.  The federal Central Valley Project has just announced initial allocations of 5 percent to agricultural contractors north and south of the Delta, and 20 percent to the Friant Division.  California will receive its normal apportionment of Colorado River this year, but present modeling suggests a significant risk of shortage in 2022 reflecting the basin’s long-term drought conditions and diminished reservoir storage.

Can a March miracle (and the remaining spring season precipitation) be accurately predicted?  Unfortunately, prediction skill beyond a seven- to ten-day weather forecast is very low. In a recent report to Congress (https://repository.library.noaa.gov/view/noaa/27408) the National Oceanic and Atmospheric Administration (NOAA) described what would be needed to improve sub-seasonal to seasonal precipitation forecasting, including recommending a pilot project for the western United States because, as NOAA said: These projects were chosen based on the existence of major climate phenomena that have huge economic impacts and for which current S2S predictive skill is too low to be effectively used by many stakeholders.